Why does the world need another TwiRiff?  After a slew of riffs from Ice On Mars, Raven’s Riffs, The Celluloid Shinobi and the boys themselves, Twilight has proven itself as the RiffTrax punching bag of the century.  It’s easy to see why.  This movie's phenomenon is like a giant, slow-moving target.  A giant, slow-moving target that makes really funny noises when you hit it.

Since we're somewhat good at taking aim we wanted to have our shot, yet take down this dumb beast in our own personal style.  We not only riff on the movie, we manipulate the movie.  We are even in the movie.  How cool is that?

In a world where teenage girls shape reality like a poorly written harlequin romance novel, high school is nothing like high school, and vampires are nothing like vampires, all that sparkles is Twilight.  This mind-numbing piece of celluloid has somehow managed to capture the hearts of throngs of weak willed teeny-boppers as well as the public spotlight.  We, The Angry Gibbons, have felt as though it was our job, nay, our calling, to bring this movie’s ceaseless asshattery to an end.

What we are hoping for is what all great Riffs create for its viewers: inside jokes and one liners.  May they abound like manna and grow like the mighty oak.  If you’re curious about cacti, want to learn more about “Mushtache Dad” or try to understand why there are so many damn monkey references in Twilight, then this is the TwiRiff for you.  You will also never hear the Mexican Hat Dance the same way again.  That is our guarantee.

ABOUT US: The Angry Gibbons are a small collective based in Minnesota and have been fans of Mystery Science Theater 3000 since they were kids.  Now they are fans of Rifftrax and are technically adults.  This riff features writing contributions and input from over ten participants but was performed by a core group of four, as well as a robot named Stephen who is learning to feel feelings.  This is their first attempt at riffing. 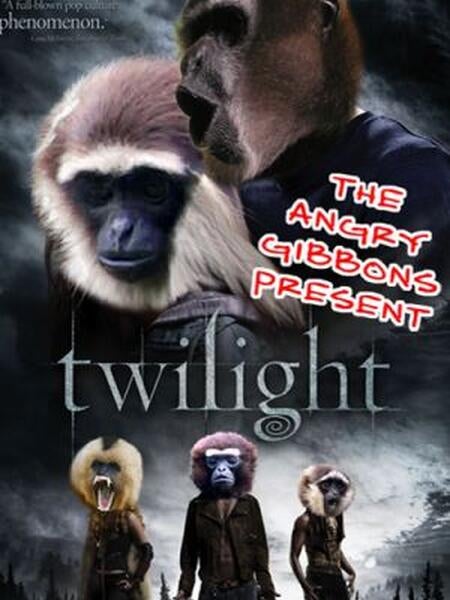