Heaven. The afterlife. Whether myth or reality, there's no denying that the promise of life after death is what keeps many people sane in a world of hardship, sorrow and cruelty. Also it's a really awesome song by Warrant. I saw them live back in '93. That was amazing. Jani Lane climbed like some sort of bleacher thing by the river in Hannibal, Missouri, and we all thought he was going to plunge to a bloody death during the refrain. Why he thought climbing a wooden structure while obviously intoxicated in the dark with hundreds of sweaty fans gathered beneath him just to sing a power ballad is beyond me, really, but damned if I didn't scream like a girl during most of the performance.

So what if your entire society was structured upon the belief that naturally occurring spatial ruptures on your planet caused you to physically transfer from your present life and zip on up to the next "emanation," wherein you are physically reborn? That would certainly be an interesting concept to play around with, wouldn't it? Especially once they find out that it actually is just essentially a naturally occurring transporter that takes you to a barren, lifeless moon. Interacting with this society would definitely be intriguing, and tricky--walking the thin line between imparting what science tells you and what their faith allows.

Oh, that would be a fine episode of a thinking man's television program, yes.

Instead, we get a Keystone Kops-style bait-and-switch story with Wang, and the woman he's replaced by is quickly kacked in order to streamline the plot. Huzzah, Voyager!

This episode of Voyager was written and performed by Michael T Bradley and Scix Maddix, with synching from Frondy as usual. After this be sure to pick up:
DogKnob's Prime Factors -- in which the costume department officially gives up!
TreacheRiffs' State of Flux -- in which metaplot is attempted to be had!
and
RiffRaff Theater's Heroes and Demons -- in which the doctor gets a lot of lines and yet it's still somehow really bad!

For any of the previous Voyager stuff, just click on the "Ice on Mars" link up above and you can pretty quickly find everything we've done so far.

Rated around a TV-14, nothing worse than, say, an episode of "South Park." 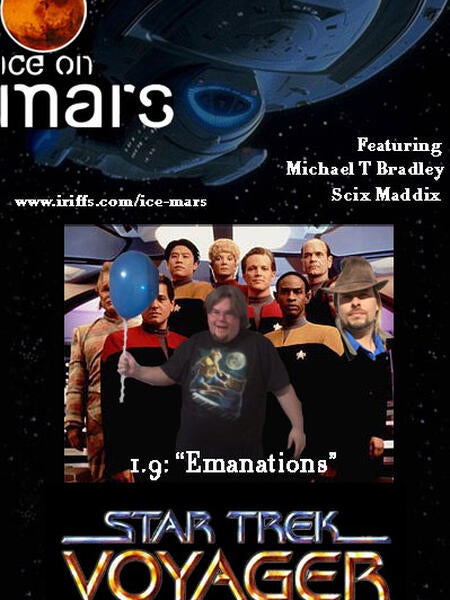