“I went to the founder days last week and ate, like, ten funnel cakes. I made fun of the guy that ran the ring toss booth, popped some balloons, won a few poorly printed off Metallica pictures, then I went on a tilt-o-wirl and vomited for three minutes straight. That’s when a German transient picked my pocket, so I made her shower in front of me.” For most of us, our Carnival Story ends at ‘puked for three minutes straight.’ But not for the cast of Carnival Story! Carnival Story is the lamest soap opera to ever be stretched into an hour-and-a-half, only with WAY more climbing. In fact, a quick IMDb search of Carnival Story reveals that the original tagline for the movie was “Now with 10 times the climbing! If you have a ladder fetish, then hot damn do we have a movie for you!” The Orwellian Nightmare Society returns in the future as Big Brother forces this cinematic abortion on them. Watch as Phil breaks up with Sheila. Marvel as Doug (Big Bunch of Doug Shorts and Dougs’ Big, Long Ones) watches somehow socially acceptable date rape scene after somehow socially acceptable date rape scene! Thrill as Mike makes poop noises! It’s all here in Orwellian Nightmare Society - Carnival Story! This is a VOD, which contains the feature-length movie, the riff, and the shorts, pre-synced for your lazy, not having two programs open on your desktop enjoyment. Also, do you like DVDs? Then burn this onto one and print out these super-nifty covers from Piobman! Standard | Thinpak | Disc Label
DVD Cover Printing Guide 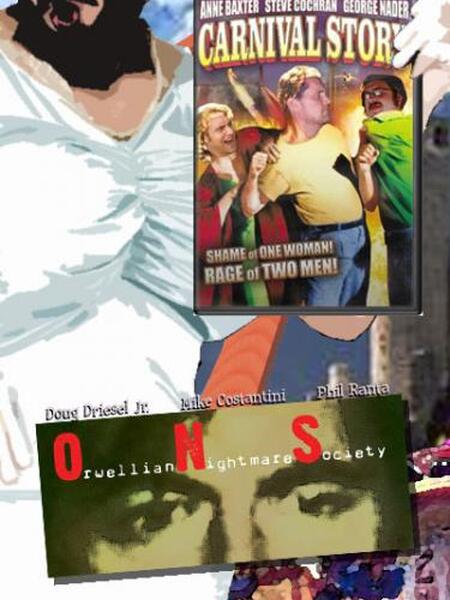