Mr.B.Natural: Cosmos: War of the Planets

In the indiscernible future man has begun taking his first tentative steps into the galaxy sending his greasy Italians into the void to explore and discover. It is an age of danger and intrigue as man grows even lazier. We enter this story at a time when man has begun passing off his work, and even delegating all his decisions, to the newest generation of super computers known as “Wiz.” Suddenly released into this atmosphere of fear and compliancy is a powerful alien signal. Broadcast from deep within uncharted space the signal disrupts Earth’s communications and seems to almost beckon humanity to its call. The nearest Earth vessel is the spaceship MK31 (catchy isn’t it?) commanded by our belligerent hero, Captain Fred Hamilton. Captain Hamilton is not at all happy with the course humanity is taking and has a powerful disdain for his commander’s willingness to hand over all their power to a machine. The brass is not all happy with him either but as he is closest to the source of the mysterious signal it is Hamilton that is sent in to investigate. What Hamilton discovers along the way gives him and his crew a glimpse into a possible future for humanity as they fight for their lives in this spaghetti sci-fi adventure full of danger, romance, and robots.

If you are a bad movie fan then this is a film for you. It has it all; ridiculous costumes, bad acting, over-written dialogue, plot holes, unexplained character relationships, terrible special effects, miserable lighting, absurd concepts, and an awful (even painful) soundtrack. Judging from the various posters and time of the film’s release one would surmise that this film is a cheap rip off of “Star Wars.” If this is was the creator’s intent it fails miserably as it more closely resembles a cheap, and terrible, rip off of the original “Battlestar Galactica.” It is nearly too painful and dull to watch on its own but that’s why I’m here. Join me, Mr.B.Natural, as I sink my teeth into one of the worst films in cinematic history! This product includes a VOD in MP4 format as well as a seperate zip file containing just the MP3 audio Rifftrack and text file. The runtime is 1hr 29min 03sec. 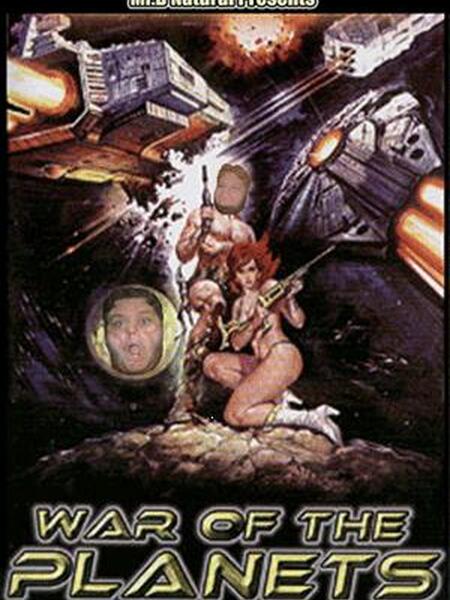