Hackers: The One Man Band

How do you successfully make a movie with unlikeable characters, an outrageous plot, and shot after shot of people staring at screens and typing?  The correct answer is, you don't, as Iain Softley's 1995 Hackers demonstrates.  On the one hand, Hackers brought Angelina Jolie (granted, a very Vulcan-looking Jolie) to the limelight, but also graced us with Matthew Lillard, so it's a mixed bag all around.

As far as plot, the creator of the Short Circuit robot has an evil scheme to steal a bunch of money with Tony Soprano's psychiatrist...until one of the Clockstoppers downloads the program that could blow the lid off the whole thing.  Their plan to cover their tracks?  Plant a virus to tip over some oil tankers (the FIENDS!)  Enter former superhacker Sick Boy, who must team up with Shaggy, Lara Croft, and...let me check IMDB here...ah, Halpern White from "The Shield" to expose the deception before the virus gets pinned on them.  And how will they clear their names?  By constantly breaking hundreds of other laws, that's how!

The One Man Band won't stand for this.  Armed with a desktop, a few million lines of code (that's programs to you who are not l33t), and a bag full of tricks, it's time to crash this system once and for all.  Hack the movie.  HACK THE MOVIE!

Special thanks to Piobman for the poster and thumbnail, and also to a special guest star who would prefer to remain anonymous. 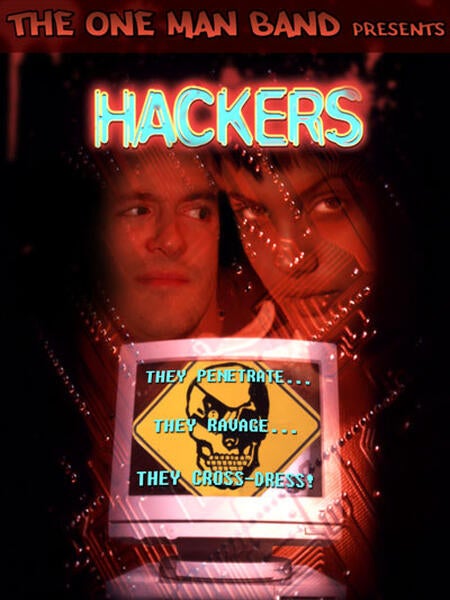